Maybe you've been thinking, "These are nice hikes, but where's the canyoneering?" Well, we aimed to correct that situation this weekend. There are a few great hikes that originate at Dough Flat. You can go to Ant camp on Agua Blanca Creek like we did a few weeks ago. Or you can take the trail to Alder Creek and Shady Camp. You can also go down Alder Creek and take the Sespe back to Tar Creek or Devil's Gate. Or you can make your way over to the Sespe Hot Springs from Shady Camp. We decided that these were not for us. The plan we came up with was to hike to Cow Spring Camp, about 3 miles from the trailhead, Friday, and set up a base camp. The next morning we would pack up our canyoning gear and head down Stone Corral Creek. Stone Corral Creek (SCC) flows through the Stone Corral, a rocky sloping decline, and meets up with the Sespe right where it turns south, at the base of Topatopa Mountain, and flows through what's known as the Sespe Narrows. The only information I've been able to find about it is a short mention from the, "Tenth Annual Report of The State Mineralogist For The Year Ending December 1, 1890."

Despite having 50lb packs the hike to Cow Spring wasn't anything to complain about. Somewhere near Squaw Flat I saw a couple of Condors fly over Hopper Mountain and then come and circle us for a few minutes before heading West. We set up camp and had nice dinner of Camp Pizza and tri-tip with a couple delicious homebrews that we had chilled in the creek. The next morning (Saturday) we ate some bacon, and bread, and then gathered up our rope. The first part of the Stone Corral is a slight downward slope. From Cow Spring to the Sespe is a total decent of 1500ft. We stayed above the creek on ridges for the most part. 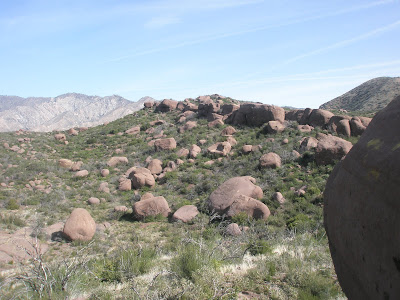 If not for a fire a few years back I think this whole area would be impassably choked by sagebrush and Mansanita. About 1/3 of the way down we came to the first waterfall. It was about 15ft high. This is where the terrain started to take a steeper gradient. 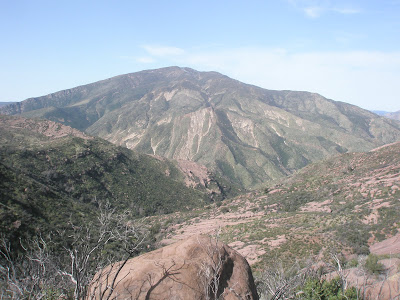 We walked up an over a rocky ridge to the right (north) of the creek. We couldn't find any signs that people had been down here at all, no can tabs, glass, nothing. At about the 2/3's mark we found another 15ft waterfall with a deep muddy cave. 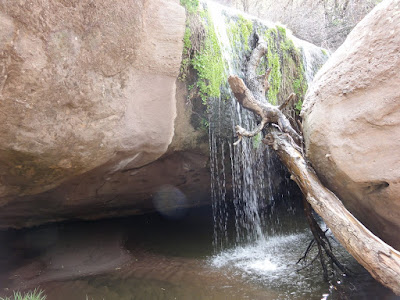 It was little bit past this that we found a rusty fence post with some rusty barbed wire sticking out of the ground. I was dumbfounded by this. I can't figure out how someone would have been able to plant a fence back here. I guess the name "Stone Corral" sort of implies that this was used to hold livestock at some point in time. But that was up by Cow Spring. Honestly I have no idea how one would get a horse or livestock down that far and back. After the fence post the gradient got steeper again, and we had to go the rest of the way through the creek. Two short rappels we required right at the end of the creek, and we were through the Stone Corral Creek.

It was about 3 o'clock, and I was tired. We had made it to the Sespe, but it had taken 2.5 hours longer then I had hoped it would take. We stopped and took 15 minutes for lunch. The Sespe was really flowing swiftly, but we had to cross it twice to get to the Alder Creek confluence a mile and half upcreek. I looked at watch and thought, "We have three hours to make a four hour hike." and resigned to to the idea that we would be doing some night hiking. At this point I was to exhausted to take any more pictures or video. Every minute not hiking was going to be another minute in the dark, I just wanted to get the heck out of there. So up Alder Creek we slogged. When the Alder Creek Narrows finally rose up in front of us my heart almost broke. However it was just intimidating and not impossible to climb up and over. A little bit upcreek and we found Shady Camp. It has a Forest Service grill and someone had left a iron pole for breaking up concrete, and a small bottle of Jack Daniels. 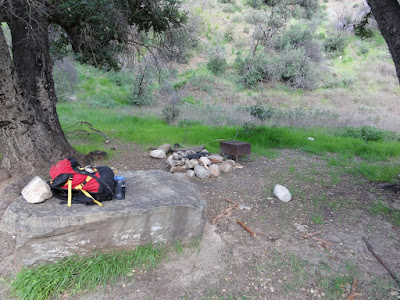 We were able to find a faint trail leading out of Shady Camp that after about half an hour brought us to a small grassy camp with a Forest Service grill. A few hundred yard upcreek we found Alder Creek Camp. There was a FS grill, and a broken FS smoker thing. 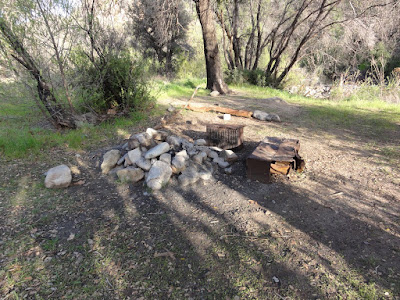 It wasn't much further when the trail started to ascend, and we knew we were close to the switchbacks. Half an hour later we made it to Drippings Springs just as the sun was starting dip below the mountains. When we got to the top of the switchbacks it was dark and I broke out my headlamp. It was about another mile before we could make out the reflections from our tents in the distance. Both of us were far to tired to make anything to eat so we changed clothes, and went to our tents to pass out, whew!

The next morning we dried out our cold, wet boots. Then we packed up our bags and headed back to Dough Flat. It had been over 40 hours since we had seen another human. We were looking forward to hot showers and hot food.

Piedra Blanca is always a nice place to go for a short day hike. You can climb the rocks or go searching for hidden caves. 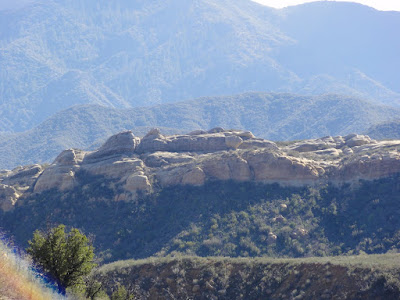 Frank, Heidi and I decided we would hike to Piedra Blanca Camp and take a look at the Chumash Rock art that is along the trail. It's no secret that there's Chumash pictography here. The Forest Service has a big display at he trailhead that shows one of the paintings in it's former glory. I won't say specifically where this site is, but it's not that hard to find. We started the hike by wading across the Sespe. 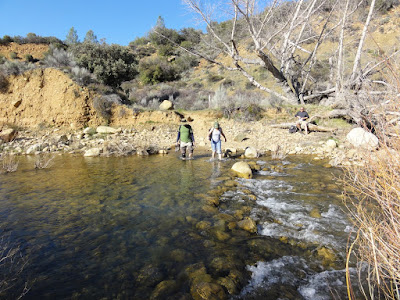 It's a short 30 minute hike to the Piedra Blanca rock formations. We spent a little time there wandering around. Then we headed up the Gene Marshall-Piedra Blanca National Recreation Trail. According to what I could find Gene Marshall was,"... a leading advocate of wilderness designation for the Sespe who played a key role in the development of the Los Padres Condor Range and River Protection Act." The trail itself is pleasant enough. It meanders alongside Piedra Blanca Creek for a couple of easy miles until you hit Piedra Blanca Camp. This is a pretty nice camp. It has plenty of spots for tents. There are a couple of fire pits. And there are a few big old Oak trees to provide ample shade and places to hang your pack. A few minutes further upcreek and you come to Twin Forks camp. This looks like a nice camp as well. There were some people camping there, so I just took a quick look, but didn't snap any pictures. The hike back to the trailhead was easy-breezy. So somewhere along this trail there is a boulder with some badly damaged Chumash Rock paintings. They look like very typical Chumash pictographs. There's a bird-like figure that I interpret as a Condor. There's a human type figure drawn with the distinct bend in the arms and legs that seems so common with Chumash art. 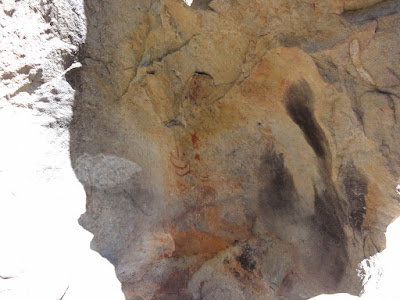 All in all it was a nice little day-hike. How about next week we try something a little more challenging?