I think this was the most enjoyable San Gabriel canyon I’ve had the pleasure of descending. You will need a permit for this hike. The trail is in the Cucamonga Wilderness, a bit north of the small town of Fontana. To get to the trail-head you have to drive on a bumpy dirt road for a couple of miles. After you park, it’s an 1800 foot hike up to the drop-in point. It took our group about two hours get the drop-in. 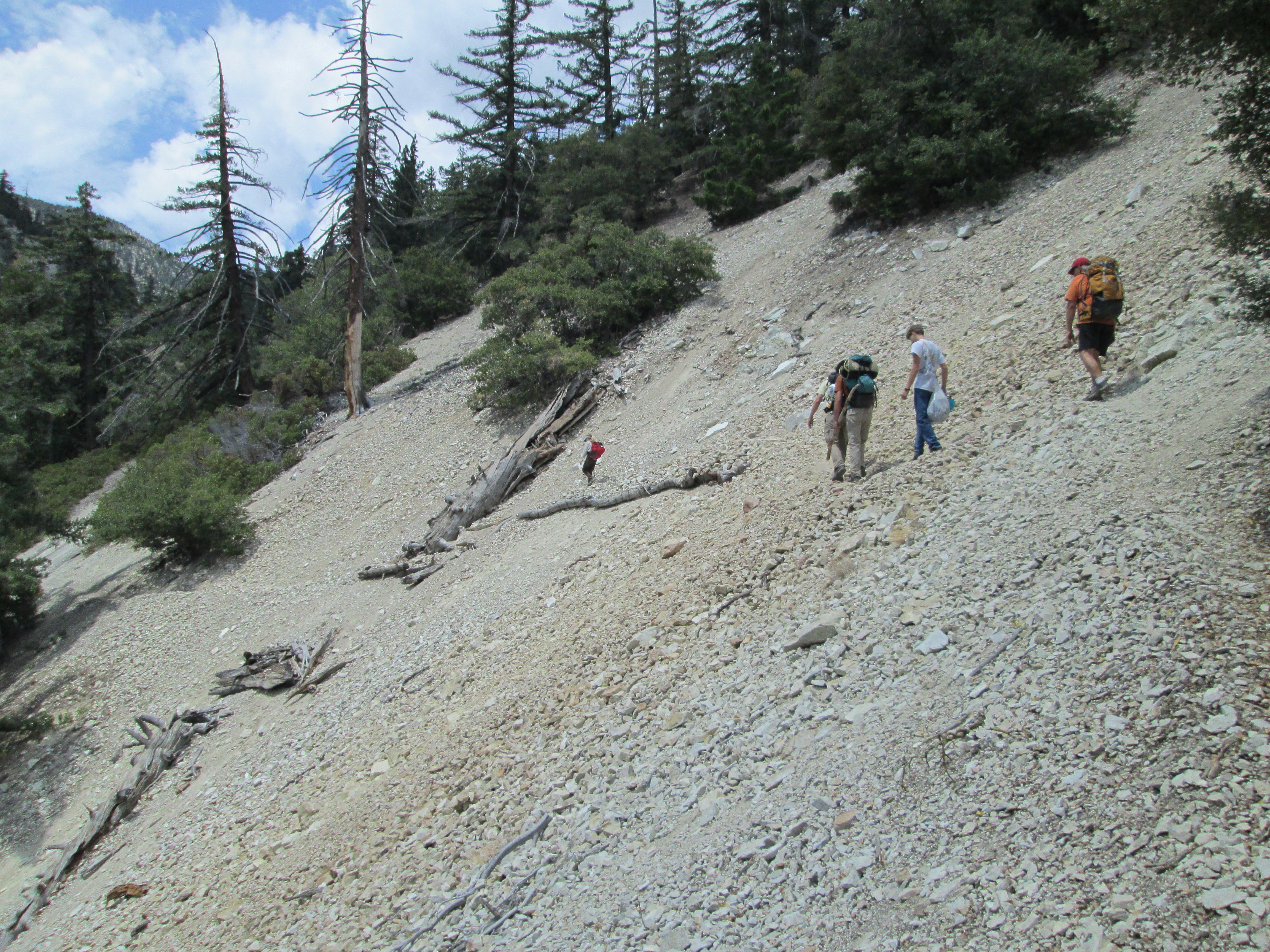 At first there wasn’t any water in the creek bed. Soon after we started going downstream the water started to emerge from the dry ground. It wasn’t too much longer before we reached the first rappel.  I finally got to use the new rope I bought almost a year ago. It’s a 9.2mm Canyon Rope by Blue Water. It’s a bit “faster” than the 9.5mm Sterling Canyontech that we also brought along. 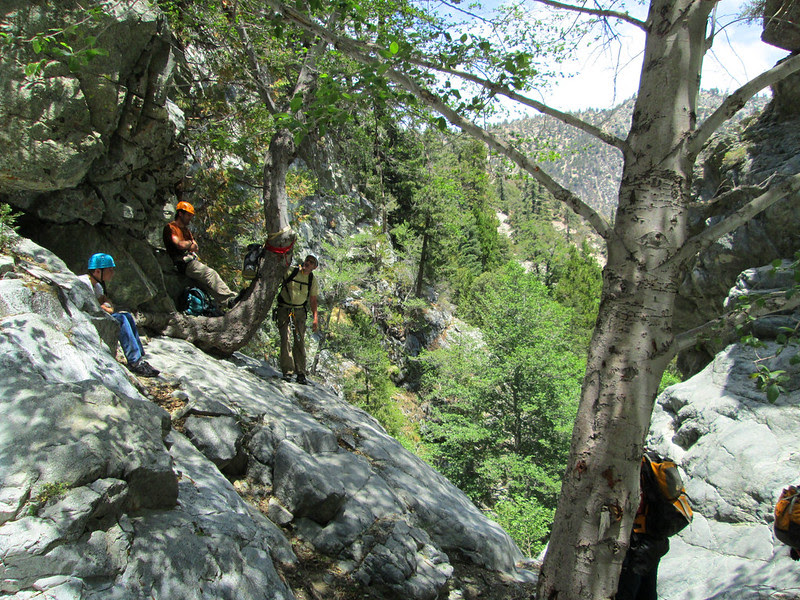 The second rappel was the best. It was a two stage rap that totaled about hundred feet. The first drop is about 25 feet. When I got to the edge of the second section I found a large boulder teetering dangerously. I locked off and pushed it off the edge. It hit the pool below with a very satisfying splash. 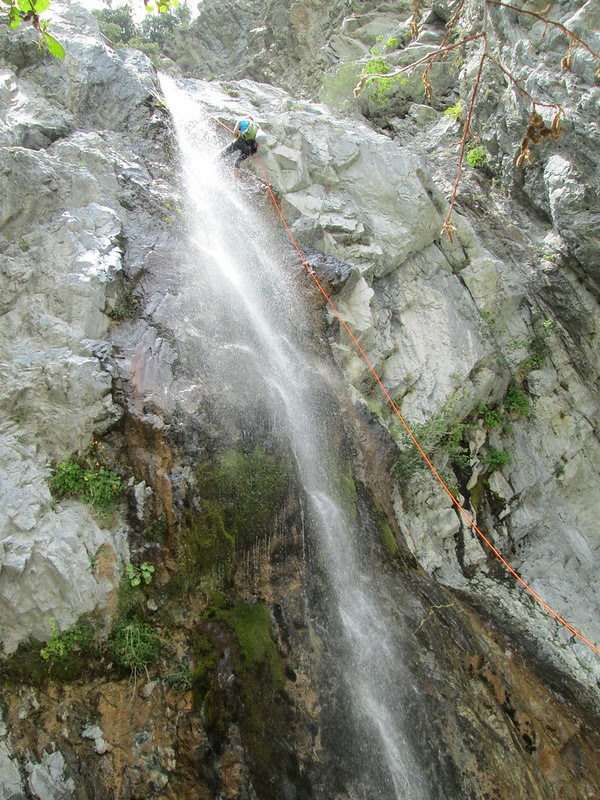 I was excited. When I got to the end of the rappel, I had to drop into a little swimmer pothole. I’m over six feet tall and I had to swim a few feet before I could bounce off the bottom. As soon as I hit the water I got a wicked cramp in my right calf. Combining the cramp with a harness loaded with climbing equipment and I was struggling a bit to get out of the pothole. I did get out though, and I stretched out my cramp.  The next person came down, and then I called up to the rest of the group to throw down another rope so I could proceed to the next anchor and rig up. They threw down a rope that landed in the pothole. I jumped into the water again to retrieve it. This time my left calf cramped up. This was the most painful cramp I think I’ve ever had. I had to ask my canyon-mate to help stretch it out. I popped a few S-caps and pounded some water and hoped for the best. 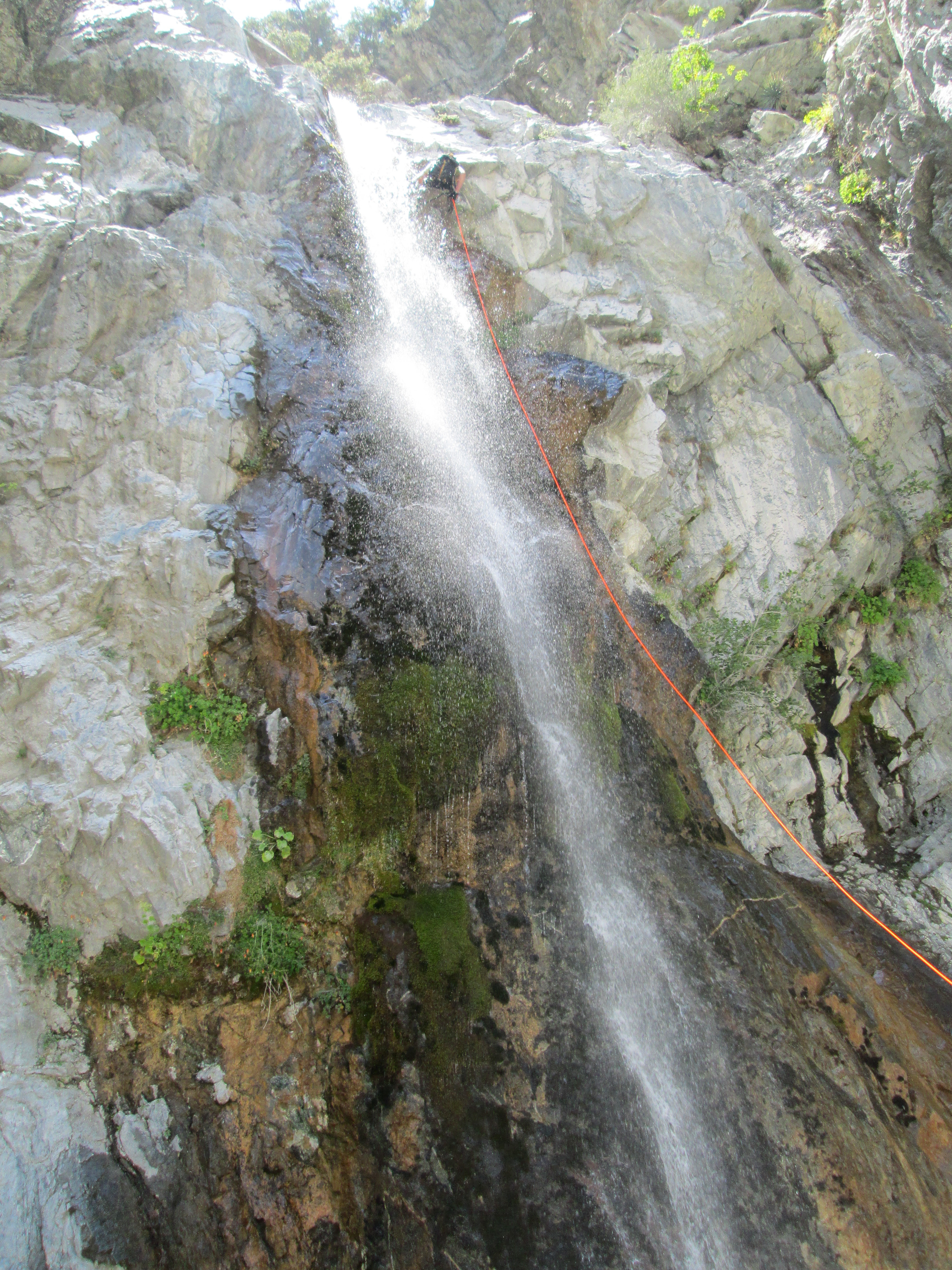 A few minutes later I was good to go find the next rappel. We found it a couple hundred yards downstream. This was another rap into water, though not as deep as the previous one. I rigged up my rope and proceed down the waterfall. A few feet down I found myself straining to keep the rope from slipping through my Totem. I had to add some friction on the fly. This was the first time I’ve had to bump up the friction on a rappel. Lucky for me adding friction to the Totem is super easy.  The pool at the bottom was only waist deep. There were two more wet rappels and then it was time to exit. The hike out took another hour or so. Thanks again to John C for taking care of the permits, and organizing this trip. Despite the cramps, I thoroughly enjoyed this canyon. I can't wait to do it again.
Posted by Ventura County Canyoneering at 11:37 AM 3 comments:

This was a really fun canyon in the beautiful San Gorgonio Wilderness, just outside of the town of Redlands. A permit is required to hike the trail. The hike to the drop-in point is lovely.  It took us about 45 minutes, and we gained 1000ft in elevation. 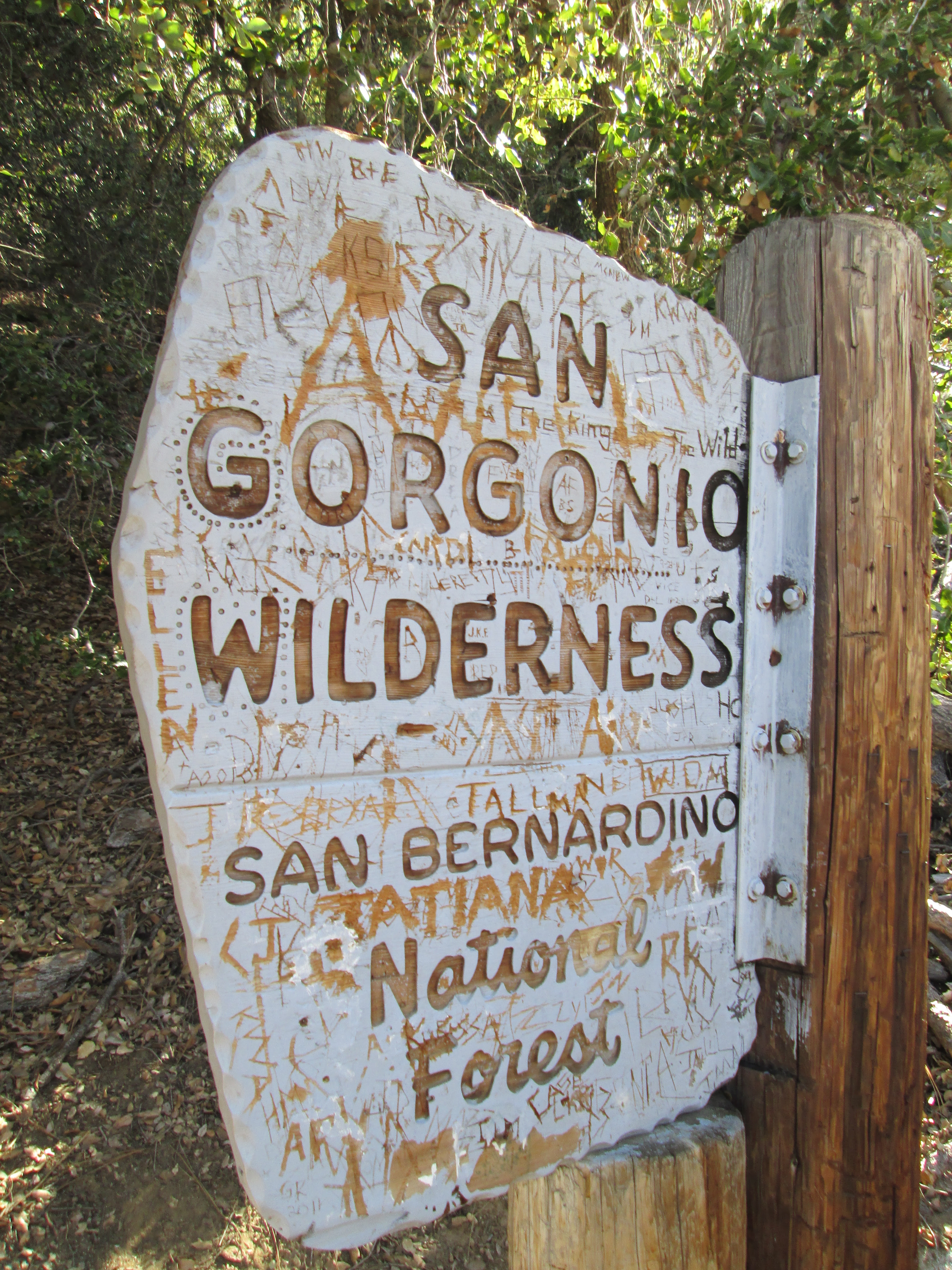 After we dropped into the watercourse things only got better. Vivian Creek was clear and cool. The water was the perfect temperature for hot day. 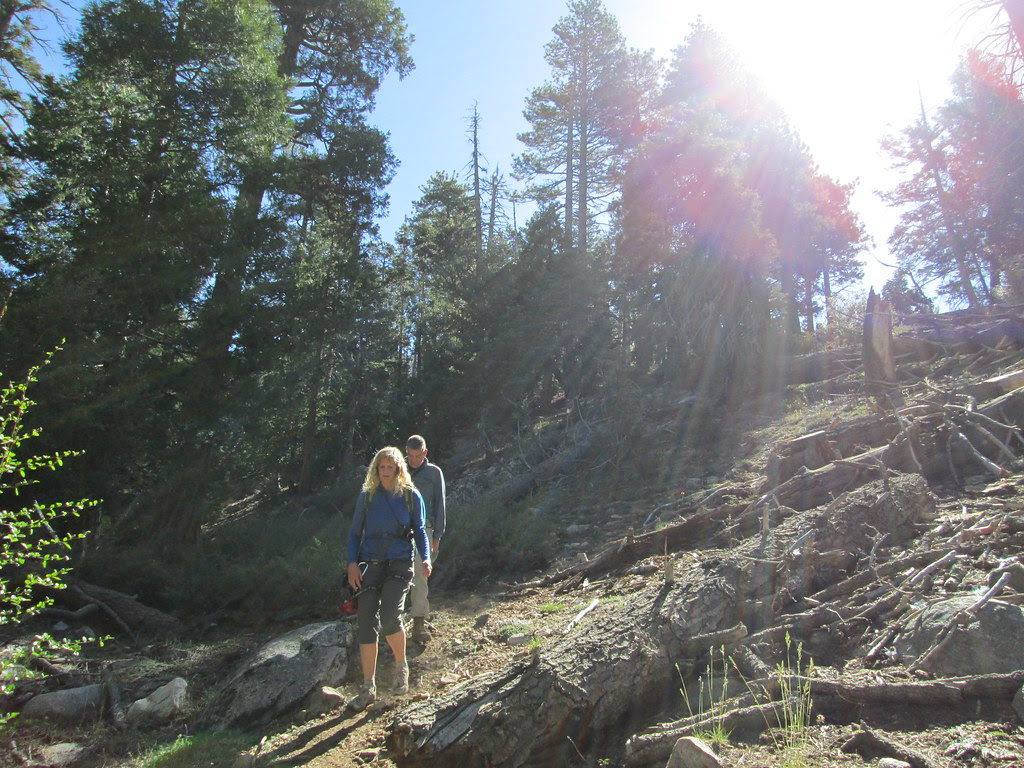 The rappels were really fun. On a warm summer day rappelling through the water is rejuvenating. We had to build on anchor, and we replaced a few oversized rapids at a couple of the anchors. 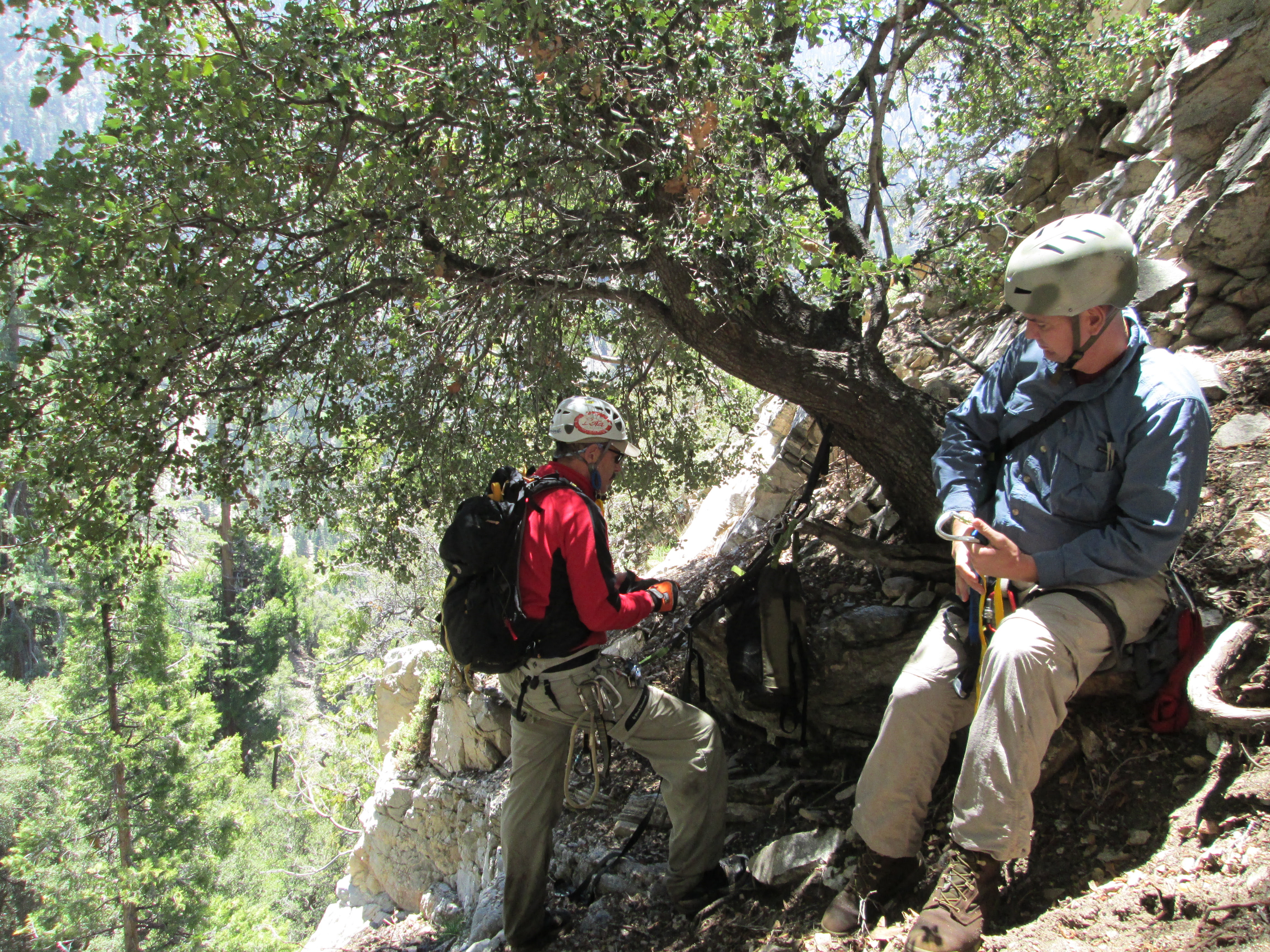 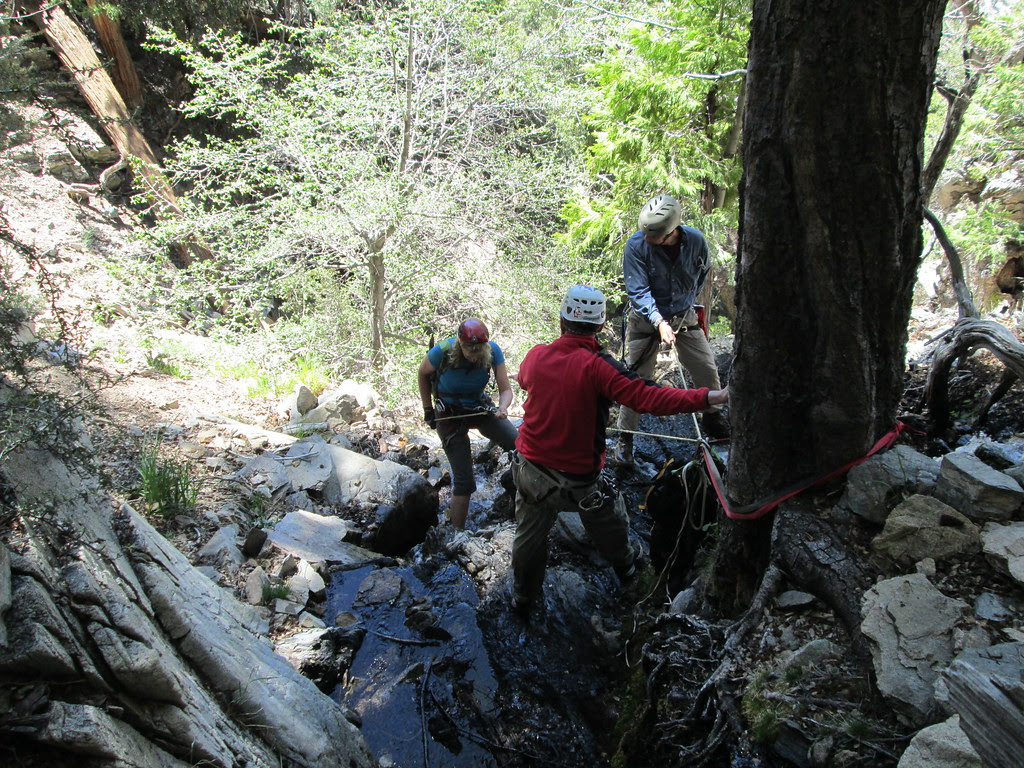 This was a very nice canyon with great views of the San Gorgonio Wilderness. I’ve got to thank John C for getting the permit and organizing the trip. It was a adventure I look forward to doing again in the future.
Posted by Ventura County Canyoneering at 3:53 PM 1 comment: