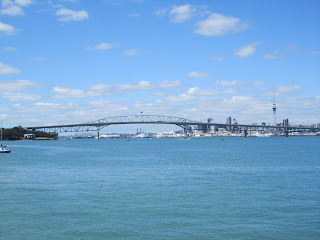 The City of Sails

I know this doesn't really have any connection to hiking, but this is my blog, so I can talk about whatever I want to, so I'm going to talk about rugby. I'm in New Zealand to visit family and to attend the Rugby World Cup championship game. The night I flew out of LAX to Auckland the quarterfinal test between New Zealand's All Blacks and the Australia's Wallabies was to be played. My flight was continuing on to Melbourne after I got in New Zealand, so there were a lot of Aussies flying back home in the plane. There was a lot of tension in the planes dry, filtered air. When the stewardess announced that, "The host nation will be in the finals" half the cabin started applauding (me included) and the other half looked down in their laps sadly. I had to smile, the All Blacks would be facing their much despised rival, France. Our Kiwi stewardess donned All Blacks scarves for the rest of the flight. The drive through Auckland to my parents house was lined with black banners hanging from windows, supporting the national team. 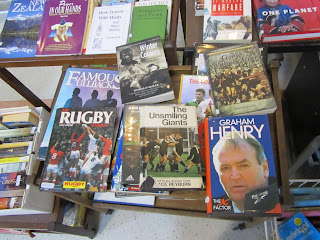 The week leading up to the final test was like nothing I've seen before. This whole country is absolutely obsessed with the All Blacks. I already knew this. I've been an All Blacks supporter myself since my family moved to New Zealand in late '90's. I wanted to learn more about Kiwi culture and rugby is the thing that unites all Kiwis. So now that the All Blacks were in the RWC Championship game the country has gone completely bonkers. I'm not sure if any thing newsworthy happened in the world this week because the only thing on the news here has been speculation of how much New Zealand is going beat the French by. But on television they will say "rival team" because they don't actually want to use the word "France". 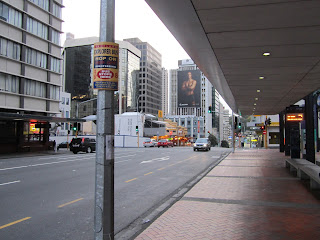 For the ladies, giant billboards of Dan Carter in his underwear are all over the city

Most Kiwi's I talked to predicted lopsided scores like New Zealand 45 France 9. My gut told me that the French would come to play, and that the score would be close. But I was definitely picking New Zealand to win. I watched Australia beat Wales in the third place test on the television a few nights before the big game. I found out the most hated person in New Zealand is not a Frenchy, but a Kiwi, Quade Cooper. He plays for the despised Australian team. When he went down with a devastating knee injury in the test against Wales, Kiwis cheered. It was a bit sanguinary for me, but it shows how crazy the locals are for this game. 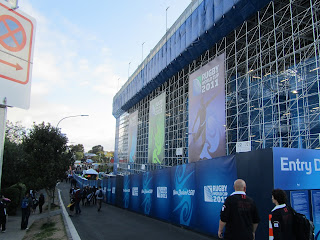 
Finally the day of the Championship arrived. My companion for the game was my 11 year old nephew. He got decked out in all black, and and his mum painted his face. She dropped us off in Takapuna where we caught a bus to the stadium, Eden Park. We got there before the gates opened, so we had time to walk around outside the stadium and take in the atmosphere. New Zealanders are fairly civilized bunch. There was excitement in the air. Anyone wearing blue was getting an earful of smack talk by drunk Kiwis, which I thought was great. We went inside when the gates opened and watched the stadium fill up. I saw a few beer drinking challenges between French and New Zealand fans, followed by drunk singing from both. 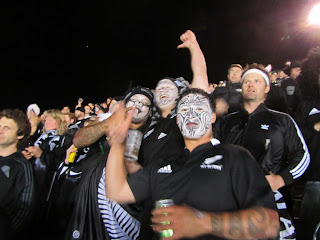 The sun went down and it was time for the opening ceremony. There was a naked Maori (I hear it pronounced: Mah-ree, with a little roll on the r) blowing on a big horn of some sort. Then the two sides sang there national anthems. 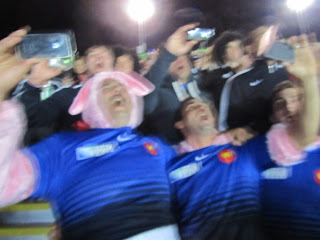 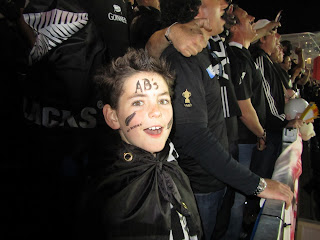 ... And Kiwis singing theirs 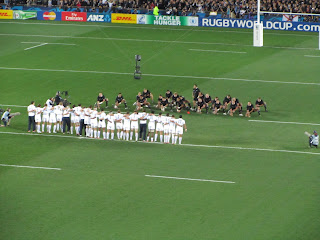 France steps up to the Haka


Then it was time to start the test. From the opening kickoff it was a battle. The high score the New Zealand fans had wanted didn't materialize. At half time a lot of Kiwi's were nervous wrecks. And the French were sensing another upset was in the works. The second half was much like the first, a low scoring, back and forth war of attrition. The last five minutes of the game were just so tense. But then the referee blew his whistle and the stadium went erupted in joy. People started singing and dancing. I was hugged many times by total strangers. This went on and on while the grounds crew set up for the closing ceremony. After the medals were handed out the French team did a lap to thank their fans and they got a well deserved round of applause from the Kiwi crowd too. Then the All Blacks did their lap, and closed the evening by doing the Haka one more time. 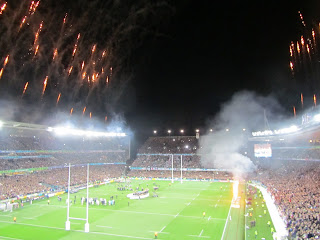 After that the crowds swamped Auckland, and celebrated for the rest of the night. The next day there was a big parade in downtown Auckland for the All Blacks. 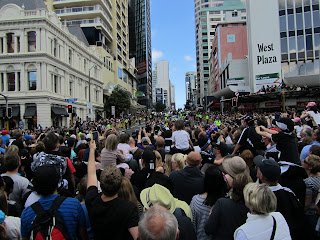 A little people marching band in the parade for the Champions 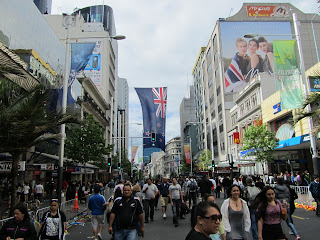 Queen Street after the parade


I had a blast this whole week of the finals. It's been an experience I'll never forget. This is a great country populated by really nice, honest, slightly crazy people. Stay tuned, there's actual hiking and canyoning content to follow soon.