Megan wanted to go out on a hike instead of watching the Superbowl this week. I supported that plan 100%. I went to the Rugby World Cup Finals a few months ago, I don’t need to see the Superbowl. The only requirement she had was that we had to drive up the 33. I decided that Munson Creek might be fun to explore. (Update: After an exhaustive re-review of the maps, I have concluded that we were actually in the un-named creek between Munson Creek and Burro Creek. Sorry for the confusion.)

Munson Creek lies between Potrero John Creek and Chorro Grande Canyon. We found a spot on the side of the road to park. There was a well defined trail right at the edge of the road. We followed that trail a few hundred yards to a flat area. Enormous sandstone formations emerge from the chaparral in typical Los Padres form; pocked, craggy, slightly intimidating, and intriguingly mysterious. Before you get to rock formations you will notice that the ground is covered in spent shell casings and blasted to shit targets. Shattered glass was ubiquitous. We found three SCUBA tanks that someone had hauled up there to shoot. Stuffed toy animals were found mercilessly executed. I guess since people can't shoot at Cherry Creek Rd (just up the 33 a little bit) anymore they probably just come down to Munson to shoot their old computers. The creek bed was dry for the most part. There were a few little pools of water here and there, but no flow to speak of. When there is water flowing, Munson Creek drains directly into the Sespe. It drives me nuts how inconsiderate these jerks are. I hardly ever see anybody else in the forest, yet there’s trash almost everywhere I go. 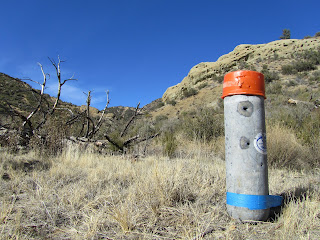 Okay, enough trash talk. We continued to follow the trail as it wound its way north towards Pine Mountain. We saw some cool boulders. 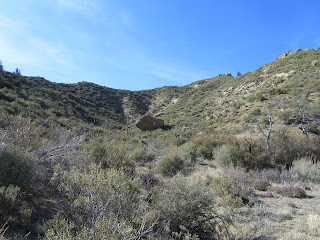 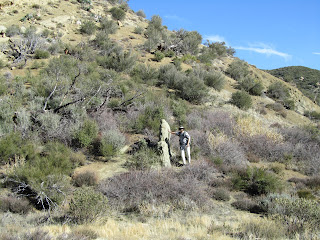 This rock was happy to see me. 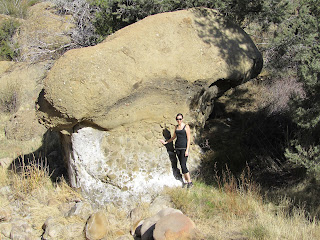 We started finding all kinds of fossil imbedded rocks in the creek bed. Little clam and snail shells were just sitting there, as they have for the past few million years. 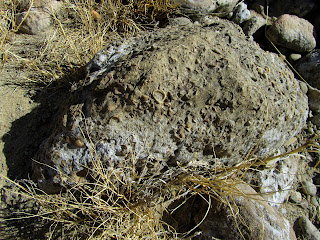 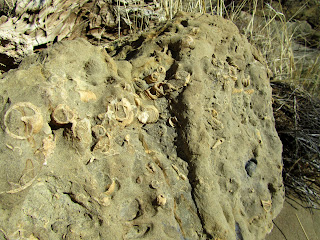 The trail lead us to a rock wall with two waterfalls, one at each end. The pool that the bigger falls spills into is nice and deep, at least six feet. There doesn’t seem to be an easy way past the rock wall. I think you could probably scramble up the hill on the west side of the creek, but I didn’t try. We wandered around a bit looking for other cool stuff. 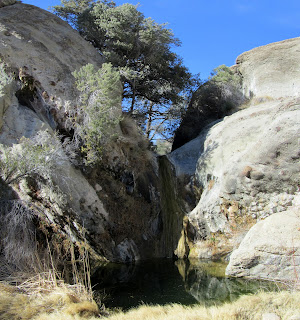 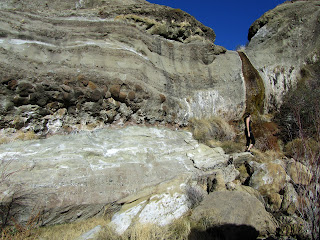 Then we headed back toward the car. We stopped and ate some snacks in a drainage tunnel that goes under the 33. Then we got in the car drove up to the Chorro Grande trailhead, looked around a bit, then drove back down to Ventura.
Posted by Ventura County Canyoneering at 9:15 PM 6 comments: