I really wanted to get out this weekend and get some sort of hiking done. I just finished Ed Vistuers book, K2 Life and Death on the World's Most Dangerous Mountain. I thought it was a really good book. It recounts some amazing stories of people trying to summit the second highest peak in the world. It also got me fired up to get outside and put some miles under my feet. I had a few places in mind, and in the end settled on going to Piedra Blanca. I wanted to scout some rappelling routes, then go explore some of the rock formations nearby. I found an excellent 80-90ft rappel anchored by a super solid tree. 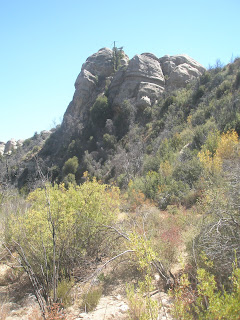 From the top of the rap I had a great view of Piedra Blanca Creek and Pine Mountain. I headed north up PB Creek for a bit, then I ditched the trail, and bushwhacked up a dry creek-bed that brought me above the canyon. I decided to head towards some trees to the northwest where my topo map said there was a spring. It was pretty choked with sagebrush up there. After about an hour of slow progress I came upon a trail. I was little bit surprised to find a trail up there. "What could it lead to?" I wondered. I wasn't sure it was a man made trail either. I couldn't find any bootprints in the dirt. But the trail definitely ran parallel to the dry creek-bed. I followed the trail for another hour or so. Then it just kinda petered out in to the brush. It was time for me to turn around anyway. So headed back the way I came. At the spot where I first picked up the trail I saw that there was a fork in the trail that lead back towards PB creek.


I decided to follow that instead of bushwhacking again. After a few hundred yards the trail brought me to a clearing where I found a an old rusty sign post. In welded letters it said "Spectrum #1 25-6N - 22W". 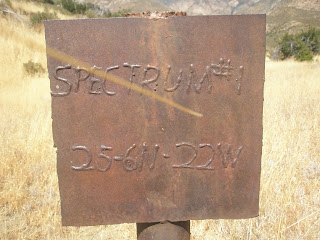 That was pretty cool. I always like finding old stuff. I thought it might be a old marker for an oil-well from way back when, but I really don't know what it is. (Update: After some research, and a helpful email, I've learned that those numbers correspond to The Public Land Survey System. I suspect that Spectrum #1 was the name of an oilwell.) The trail didn't seem to go back down to PB creek from there, so I had do a bit more bulldozing to get back to the creek-bed I came up. Then a short scramble and I was back on the main trail. I ran into a few people on the way back to the parking lot. 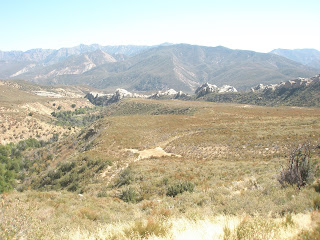 I had a really enjoyable day just wandering around doing my own thing. I want to go back up there again soon, and do some more exploring. Maybe even find a cool place to camp back there somewhere.
Posted by Ventura County Canyoneering at 1:29 PM 1 comment: