Well, we knew we wanted to get out this weekend. We just didn't know where to go. We had already hit up Ventura's big three, Tar Creek, Matilija, and Santa Paula Canyon, in our last three hikes. So I tried to think of somewhere cool to visit. What I came up with was a trip to Santa Barbara's Santa Ynez Mountains. So we drove up the San Marcos Pass to West Camino Cielo Road. The marine layer was thick up on the pass this day. As we drove higher up the mountain we temporarily got above the fog. I had read about an area called The Playground that was supposed to be real popular with local boulderers. When we got to the unmarked trailhead, right across the street from a sign that says, "Tanbark Oak", I was little surprised that we were the only ones parked there. The sun had been up for a few hours, I had thought there would be other folks up there before us. The trail led us down the ocean side of the mountain. The fog made it hard to judge how far we went down.

There were lot's of big rocks to climb, and explore. I think we hiked down for at least a hour, maybe two. The fog rolled in some more, and our visibility was reduced to about fifty feet. 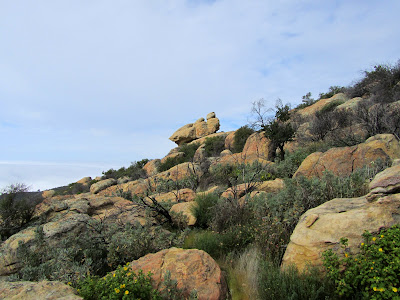 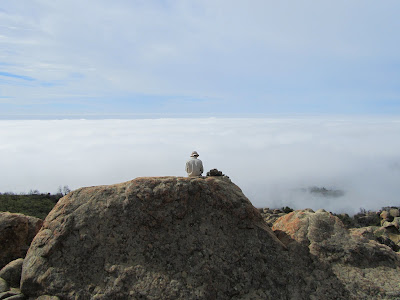 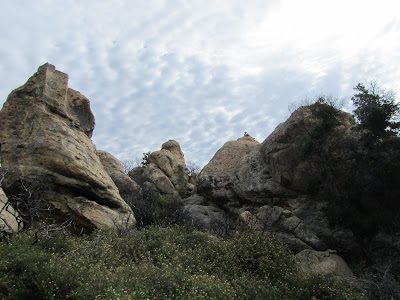 We took a snack break, then headed back up the mountain. I guess Santa Barbara woke up while we were hiking, because the road was filled with parked cars when we got back to the Jeep. It was around noon, and we still had plenty of energy, so we decided to go up to Lizards Mouth, and practice some rappelling on the rocks up there. 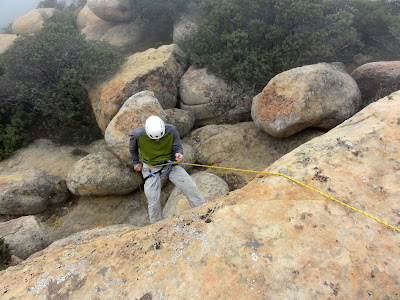 I think we spent a hour or so going over rigging and reviewing some techniques. I practiced rappelling past a knot in the rope. The wind picked up, and we decided to call it a day. That's about it. Sorry, nothing too crazy this week.
Posted by Ventura County Canyoneering at 3:46 PM 2 comments: