The Most Remote Campsite in the Southern Los Padres

I haven't been getting out hiking much lately, so I thought I would see If anyone out there would be willing to share some information with us. I've been thinking about what is the most remote campsite in the Southern Los Padres National Forest. Almost every campsite here is within a days hike from its nearest trail-head. So I'm trying to think of camps that are more than a days hike away.

So, what I have come up with? How about Bluff Camp? I've never been there, but it looks like one would first hike up Santa Paula Peak, then stay at Cienega Camp, then the next day take a couple of hours to get up to Bluff Camp. It looks like if one were a real bad ass mofo they could probably get to Bluff in a long day. Has anyone out there ever been to Bluff Camp? I would appreciate any info you would like to share. Like when you were there, was there water, etc...

Then I found two other camps that I think are definitely two-dayers to get to. Cove Camp on Agua Blanca Creek looks extremely remote. From either Dough Flat or Lake Piru it looks like one would have to spend the night Ant Camp, or Log Cabin Camp respectively before moving on to Cove Camp.

The most remote campsite I could find would be Halfway Spring Camp. It's located way up some no-name tributary to Piru Creek. I think it would probably take a very long day hike to get Ellis Apiary Camp, then it looks like another very long trail-less hike up the no-name creek to Halfway Spring. I have no idea what you're halfway to once you get there. If you know any thing about Halfway Spring please let me know.

Do you know anything about these sites? Or if you know of a really remote campsite please share.
Posted by Ventura County Canyoneering at 4:58 PM 12 comments:

I've been going a little stir crazy the last few weeks. I haven't done any hiking since early June. So, Frank and I decided we needed to get out this weekend and do something fun. We thought about heading out to Dough Flat, and going to Agua Blanca or Alder Creek, but with the forecast predicting 90+ degree weather we settled on the old familiar Matilija Creek.

There has been a lot of buzz in the local media about this area recently. One particular property owner doesn't want the public to use the trail that goes through his family's private property. Since there is no other way to get into the canyon, the public is denied access to this incredible place. To me it seems like this guy is basically trying to claim ownership of the 30,000 acre Matilija Wilderness because he owns the last plot on the road. This really irritates me. I've run into this same issue in Lake Piru as well. I think it's just fundamentally wrong for one property owner to block access to Federal, public land for no other reasons then they're cranky, and bitter. Thankfully, the good folks at the Blue Heron Ranch are still cool, and let people pass through their section of private property (I'm in no way speaking for them. I only say this because they have kept their gate open).

There are a ton of websites that will tell you all about the Matilija trail. The first post on this blog is about our hike up Matilija in January. So I won't bother with stuff that's been well covered before. We figured with it being summer time and all that there would probably be quite a few people heading up to the falls to swim. So we decided that to bring our rappelling gear, and drop down past Lower Matilija Falls. 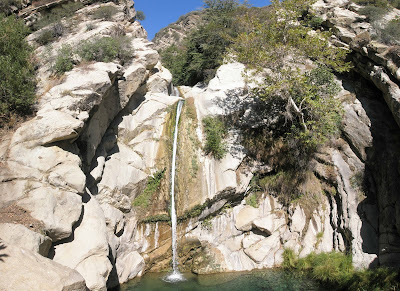 We climbed up the river-right side of the main falls. There is usually a rope set there to help you get up. I set our anchor in a crack in the rock near the point that looks over the upper pool. If you look at the picture above there's a little bush sticking out into the blue sky. That's where we set our anchor. There's a smaller pool right above the main falls I call "The Trap", we dropped in right above it. My anchor got stuck when we tried to pull it, so we left it there, and Frank said he would go get it when we were done. 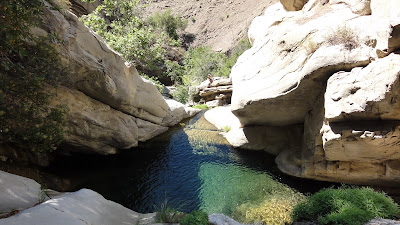 A view from above The Trap 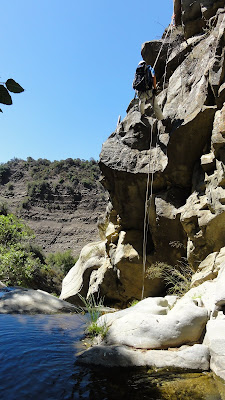 Rappelling past the main falls

After getting past the main falls there is no trail. Sometimes we had to find our way through the growth by crawling, climbing, or bulldozing our way through. It takes only a couple of minutes to get to the next swim hole from the drop in point. We have called this swim hole "The Wedge" because of the dramatic geology around it. 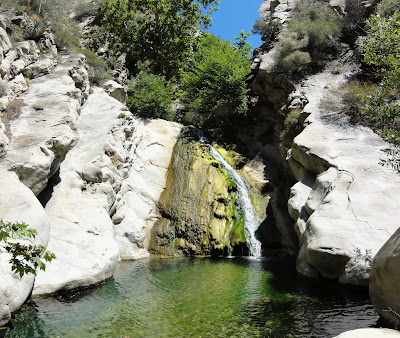 It was really hot when we got there. 94 degrees to be precise. The creek however, was a cool 63. It's been about two years since I've been to this spot. This used to be a great place to jump into. We were able to jump from perches about 15ft up from both sides and not touch the bottom. I'd guess it was probably 12 feet deep. But now the water is only about waist deep. I guess it got filled up with rocks over the last two years. I was kinda bummed. 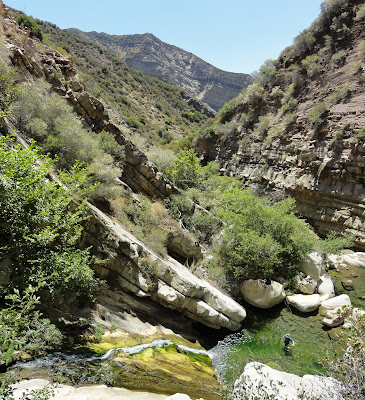 View of Matilija Canyon from above The Wedge

We climbed up the the steep rocks on the side to a similar, but more shaded pool right above The Wedge. It too is only about waist deep water. We hung out up there for about an hour then went back down and got ready to head back. 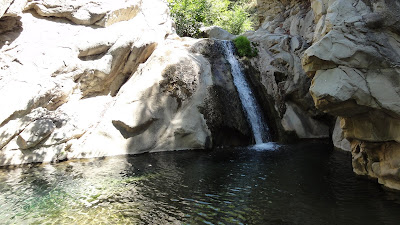 A swift footed fellow named Matt had climbed down using my pull-cord, and had gone exploring further up creek. He returned to The Wedge at about the same time as we were getting ready to head out as well. Matt was able to climb hand-over-hand back up. I don't like climbing hand-over-hand, so Frank and I decided to hoof it out via a rocky slope on the river-left side. Matt was kind enough to throw us our anchor so we wouldn't have to come back for it. I really appreciated that, thanks Matt. The slope is a pain in the butt. It's really choked with sage brush and manzanita on the way up. And the way down is a steep scree run with lots of loose rocks.

The hike back was pleasant enough for how hot it was. I'd like to go back up there sometime, but I think I'll wait for it to cool down a bit before I try again. I like comments, feel free to leave one.
Posted by Ventura County Canyoneering at 12:59 PM 4 comments: