Animals In The Forest

I’ve been trying to remember all the different animals I’ve seen while out hiking over the years. I thought I should list some of them here.

Mountain Lion: I once saw a mountain lion from quite a distance away. I was up at Bitter Creek doing a fence removal project when someone spotted it running on along a ridge. I can’t quite remember how far away it was, but I do recall being impressed by the speed it was moving at, and the overall length of the cat.

The other encounter I had with a mountain lion was while camping at the Sespe hotsprings. I was sound asleep when I was startled awake by the most bloodcurdling scream I’ve ever heard. I sounded like someone was being murdered right next to me. But when we did a roll call nobody fessed up to screaming  or claimed not to have heard it all. None of us had any idea what it could have been. I didn’t get much more sleep that night and when morning finally came around I was ready to get out of Dodge. I don’t believe in ghosts, but I’ll confess, I was spooked out. I wasn’t until a few weeks or months later that I saw a youtube video of a mountain lion screaming and it sounded just like what we had heard that night.

Bobcat: I’ve seen bobcats a few times. I always seem to see them while driving on the road. I remember seeing one pop out in front on Portrero Seco road, and I think I’ve seen few on Goodenough Road on the way up to Tar Creek.

Kangaroo Rat: One of the first times I hiked to Tar Creek I remember seeing this weird little creature pop up and it started hopping across the trail like a kangaroo. I had no idea what it was the time.

Bats: Bats are everywhere. I remember a bat flying out of the Chumash cave on Alder Creek and scaring the heck out me.

Bighorn Sheep: Yup, there are bighorn sheep out there. I’ll keep the location where I saw them a secret for now. 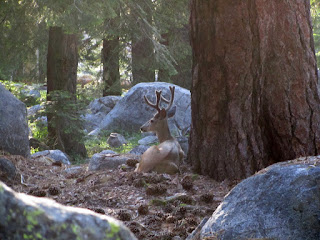 This is the best wildlife photo I ever shot

Deer: There are deer everywhere.

Skunk: I like skunks. They’re cool little animals. You can bump into them anywhere in the forest.

Rattlesnakes: I’ve run into lots of rattlesnakes all over the forest. There used to be a really big boy that lived in that rock wall on the Blue Heron Ranch in Matilija. I saw him quite a few times soaking up the sun in the middle of the trail.  They are usually pretty calm and just want to be left alone. A lot of the time they don’t feel like moving off the trail and need to be gently coaxed into getting out of the way. This will often times piss them off. I now wear a pair of snake proof gaiters when I hike off trail alone.

King Snake: I’ve seen a couple of king snakes. I like them because they are easily identifiable, and they are not venomous. Most of the king snakes I’ve come across are the white black variety, the common king snake. But once in Santa Paula Canyon I saw a colored one which I think was a California king snake. 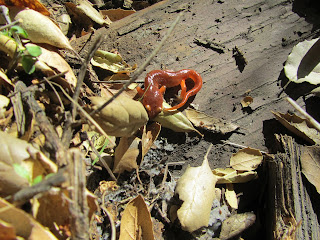 An ensatina from a trip to Rowe's Gulch in Santa Barbara

Salamander: I’ve seen plenty of salamanders. Usually they’re pretty small, about the size of a finger. But I remember seeing one at  Seven Falls in Santa Barbara that was huge (by salamander standards). He was hanging out in the bottom of a narrow but deep (5ft?) pool. I want to say it was a foot long, but it was probably more like 8 to 10 inches long and pretty stocky.

Arroyo Toad: I believe I saw an Arroyo Toad once at Hard Luck Camp.

Tarantula: I remember camping in Matilija once and swarm of tarantulas came crawling down the canyon around dusk. We’re talking hundreds of them. It was the stuff of nightmares if you’re an arachnophobe.

Glow worm: I saw a Pink Glow worm once camping. Where were we camping? Willett? I can’t remember now.

Condor: The venerable symbol of the Los Padres. From Bitter Creek to Hopper Mountain to The Sespe I have had the honor of seeing quite a few California Condors. They are gigantic. I like it when I’m out on hike and a enormous shadow swoops over me, I look up and a condor is circling overhead. A lot of people tell me condors are ugly birds. I guess everyone is entitled to an opinion. But I think they’re awesome. I’ve looked into condor’s eyes and seen that they are thoughtful, intelligent animals. I remember once laying down for some rest in the Stone Corral after some strenuous hiking when a condor started circling above. I thought, “Oh it’s hoping we’ll die soon so it can pick our bones.” And I thought that was lovely.

Camel and Zebra: This is a weird one. But I swear, once I was out hiking, I think it was on the Sespe probably near the Willett hot spring, but I’m not completely sure of that. When I saw a guy leading a mule train that consisted of a camel, a zebra, and a horse. Sometimes the Los Padres surprises you.

Animals I have not seen

Pig: I have heard that invasive wild pigs are running around in the forest, I have never seen one.

Beaver: I also heard that beaver used to live on the Sespe. What a treat it would be to see one of those little guys swimming around building dam.

Sasquach: I know this hairy bastard is out there, lurking in the shadows.

Feel free to leave a comment or a story about an animal you've seen out in the forest.