One of the more impressive geological features of the Southern Los Padres rivers are the narrows. It happens when a river that normally meanders through rolling hills cuts through a rock formation, creating a narrow slot. Some examples I know would be the Sespe Narrows below Devils Heart Peak, and again further south at Devil's Gate. There's also The Alder Creek Narrows, and Piedra Blanca Creek has a narrows section. Agua Blanca Creek has two narrows sections, The Devil's Gateway, and The Big Narrows.

Dave Stillman contacted me recently to see if I was interested in checking out The Big Narrows. I knew it would a tough, probably nasty hike. So I signed up, and recruited Frank to come too.

We decided to make it a three day trip. Friday morning we hiked from Dough Flat to Ant Camp. Ant Camp sits at the base of Cobblestone Mountain where Agua Blanca Creek turns east towards Piru. It only took about three hours to make the trek. The trail is great condition. Someone, maybe the CCC, has recently trimmed, and flagged the trail going down the big hill that leads to Ant Camp. I tip my hat to whomever did that hard work, thanks. Once down at Ant Camp we set up our stuff, collected water, and gathered wood in anticipation of some cold nights. 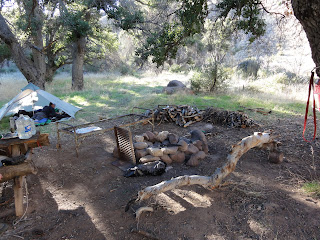 We also set up the horseshoe stakes to standard distance. Now you can enjoy a nice game of horseshoes next time you go down there. It was a pretty brisk evening, but the fire was large, and kept us warm until we ready for bed. The next morning we woke up a prepared for the difficult challenge we were expecting. We started heading east along side the creek at about 8:20. The trail isn't too bad for the first mile or so. We saw a few spots that would make fairly descent campsites in a pinch. There used to be a campsite called Tin Can Cabin down here. We made a good effort to find some sort of trace of it, but I'm afraid that all signs of it are completely gone now. 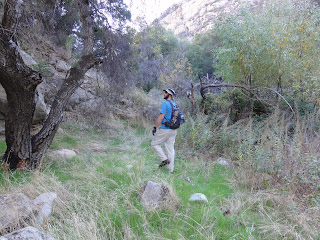 Looking for Tin Can Cabin

The trail got steadily worse the further we went. The poison oak was ubiquitous as expected. There were also those nasty, thorny vines everywhere too. Tons of fallen trees blocked the way. Sometimes the only way through was to slog through the creek. 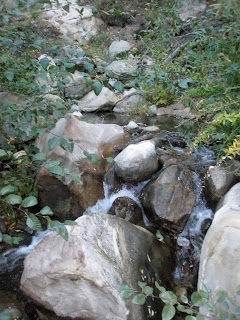 After about three hours from the start the canyon started to zig-zag, and really narrow, aggressively. Finally we got to a point where you could no longer skirt the edge of the creek, we were entering The Big Narrows. 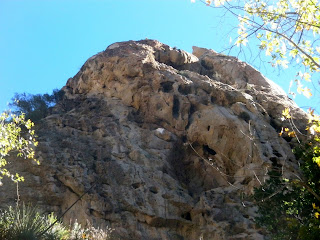 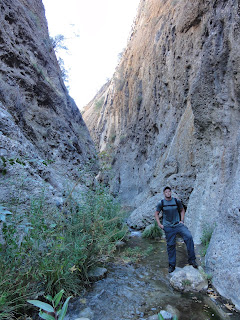 The walls squeezed to about ten to twenty feet wide, and rose 500 to 600 feet high. Frank and I removed our boots, and put on the water shoes we had brought with us. The water was 49.5 Fahrenheit. I wore heavy wool socks with my shoes, but my feet were still freezing. Frank had better luck with neoprene. The creek turned north then sharply came around a corner and headed south. We stopped in that section and had lunch. 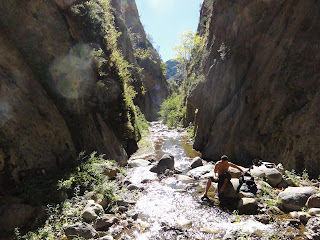 If we had decided to continue I think we would have made it to Cove Camp in maybe another hour, who knows? But, we decided that we had gone far enough. We had been hiking for about four hours. I figured that since we had been going down stream it would probably take us longer to get back to camp. But I was wrong. We bulldozed back to camp in only three hours. We gathered a little bit more wood for the evening. Then we focused on dinner. We traded some stories around the fire, and then headed to bed.

The next morning we gathered up our stuff, cleaned up the camp a bit. The last people there had left behind some trash like tin foil, bottle wrappers, and batteries. The hike up the hill wasn't to bad. I found some more batteries on the way up. What's up with that? It's like someone was going up the hill, found it to difficult, and decided to ditch four AAA batteries to shed weight, pathetic. Anyway, it was an easy hike out. There were some locals shooting up the parking lot when we got back. Not much you can do except leave. You can check out some shaky videos from the trip here, here, and here.

So if you like being cold, dirty, hungry, tired, stinky, sore, getting bug bites, itchy rashes, lacerated arms and legs, wet feet, filthy hands, and chapped lips then this is a hike you may enjoy.

If you have ever done this hike, or made it all the way to Piru, I would love to hear about it. Feel free to leave a comment, or send me an email. Take care.
Posted by Ventura County Canyoneering at 10:04 PM