Justin is going to be a father soon. Frank, Zach, Taylor, and I decided we should all go on a nice camping trip together before the baby gobbles up all of Justin's free time.

We eventually decided to try the Gene Marshall-Piedra Blanca National Recreation Trail. That's a long name for a long hike. Gene Marshall was Barbie-like doll back in the 1950's. The doll was so popular that in 1983 Congress named a backcountry trail after it. I swear, look it up. No, I'm kidding. From what I could gather (which wasn't much) Gene Marshall helped create the Condor Sanctuary. I have no idea when the trail was named.

The prolific author Louis L'amour wrote about this trail in his book, The Califorinos. The handsome hero, Sean Mulkerin, is led up Pine Mountain by a mystical indian to a magical cave. The nefarious bad guys pursue him with the intent to murder him. He loses them by taking the same route we do, but in the opposite direction, and then descending the Matilija Upper North Fork.

We thought it would be best to get dropped off on top of Pine Mountain and then make our way down to Piedra Blanca where we would get picked up. All the reports I've read about this trail have started at PB and then gone up the trail. We thought that that kind of uphill climbing might be a bit much for some in our group.

When we got dropped off at the Reyes Peak trailhead there was just one car (rapist van) in the parking lot. Technically the first part of this hike is on the Reyes Peak Trail, but let's not get into semantics. Almost immediately we found ourselves in an environment that we sea-level dwellers aren't used to seeing in our backyard. Gigantic Pine and Ceder trees towered over us. The air was cool, clean, and a little bit thinner then we were used to. 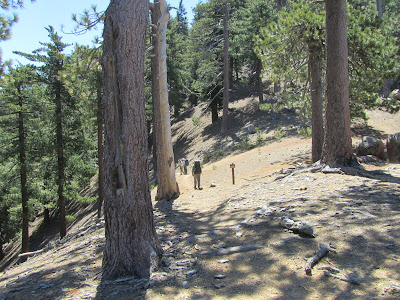 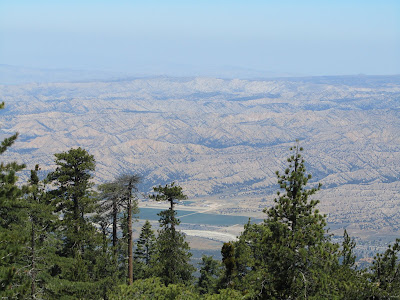 The trail skirted by the beginnings of Portero John and Derrydale Canyons respectively. The Jacinto Reyes National Scenic Byway (AKA: Hwy 33) was still viewable. We all made the mistake of thinking the first section of the hike was going to be "all downhill." there was a lot of up and down hiking the first couple of hours. Then the trail turns north at Derrydale Canyon and starts to descend towards Haddock Camp. 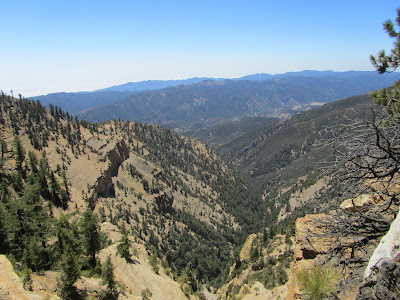 The start of Portero John Canyon 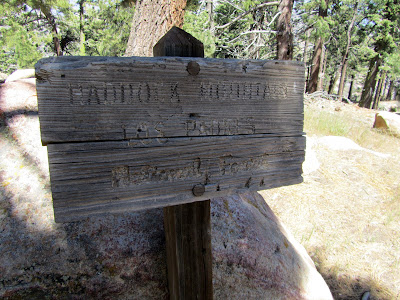 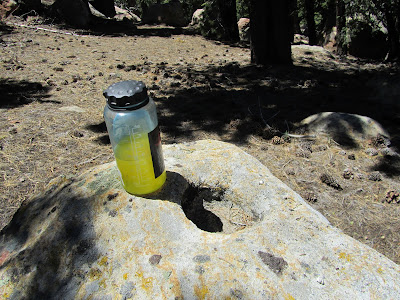 I can't tell if this a Chumash mortar or just a natural phenomenon. Does anybody know? I found a few of these in the boulders up there.

I had brought only a liter of water and I ran out as we were still making our way down to Haddock. I wasn't to worried about the water situation. The ground was moist, so there had to water nearby, I thought. And I was right, soon we came upon a nice little stream and we filled our bottles. There were a lot of ladybugs acting in a very unlady-like manner. It was a ladybug orgy. The sight of thousands of bugs crawling all over each other and yourself is the stuff of nightmares. Somehow ladybugs are an exception. They seem so cute. Then just past the stream, there it was, Haddock Camp. 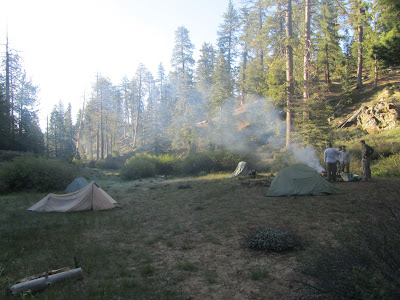 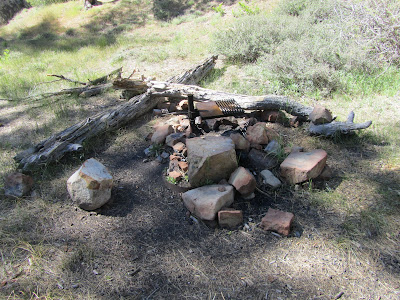 This is a really nice campsite. I guess it used to be a hunting lodge like Pine Mountain Lodge and I assume Topatopa Lodge. There's a ton of space for tents. There are four grills, three of which are still functional. And the creek runs right past the site, making water gathering a breeze. The trail keeps going east towards Piedra Blanca, and the sign says Beartrap Camp is three miles to the west. 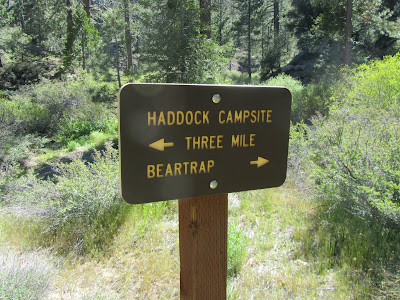 But I couldn't find the trail to Beartrap. There was a dried up creek-bed and the before mentioned creek, but I saw no trail. I'm not saying it's not there, it must be, I just couldn't find it with the little effort I put in. We decided that we were done hiking for the day, and pitched camp. Justin got the fire going, so we could grill our dinner. The wood there wasn't great. It was either punky and rotten or slightly damp. But we got it to work, and soon we were grilling Bristol Farms porterhouses. Zach brought out some Rye to get the party started. Frank made some chocolate pudding for dessert. When dinner was ready you could not find five happier fellas. 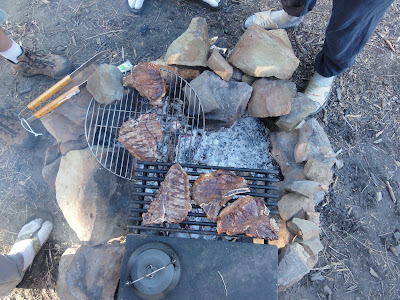 In the morning Frank made us delicious bacon. We were eating far better then we do at home. The plan was to hike to Twin Forks or Piedra Blanca camp. Hopefully we would be able to find a spot. Those are pretty popular sites on the weekend. We packed up and started towards Three Mile Camp. We were now on the Gene Marshall Trail officially. The trail hugged the creek for the most part. It didn't take very long to get to Three Mile. This is another really nice campsite. 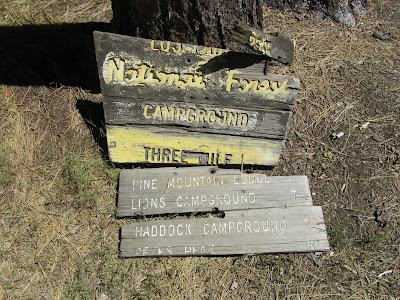 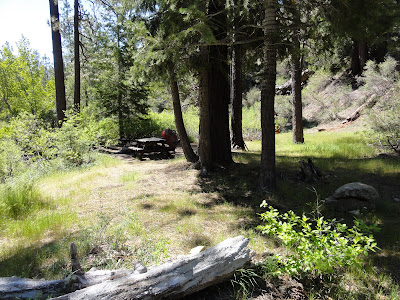 It has a picnic table! How is that still there? It must be the remoteness of this site that keeps away lazy goofballs that would burn this table up for firewood. Like Haddock this site has working grills. The site isn't as big as Haddock, but it is quite charming. This is a site I would like to return to someday.

We took a look at the map. I guessed it would take about an hour to get to Pine Mountain Lodge. 58 minutes later I pulled up to the Lodge. I was sort of excited to see this site. That excitement was quickly replaced with mild disappointment. Pine Mountain Lodge is kind of dumpy. 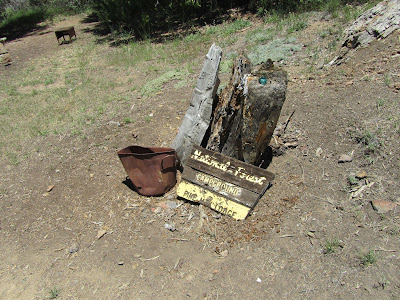 I think that little green glass thing in the tree stump is a insulator from a telegraph line that ran from PML to Reyes Peak when there were ranger stations at both sites. 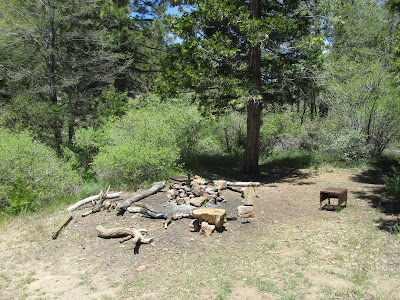 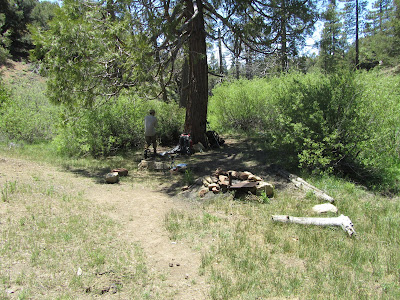 There's horseshit everywhere, including the creek. I dunno, maybe I had hyped it up too much in my mind, but I just didn't think too much of this site. I looked everywhere, twice, but couldn't find the icecan stove that I read was there. We ate lunch and got ready for our last push of the day. There's a sign at the Lodge that points out the Fishbowls trail but nothing indicating the trail down to Twin Forks and PB. Just start heading down creek and you'll find the trail soon enough. 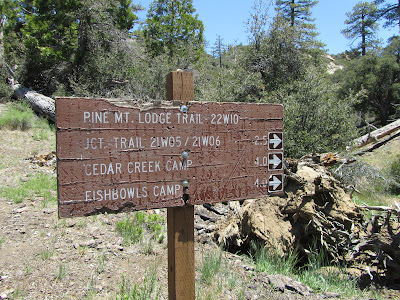 Frank took off to try a get us a spot before they were all filled. The rest of us stuck together and took our time getting down the hill. This stretch of the trail drops about 2600ft in about two or three miles. Taylor rolled his ankle about half way down. He was hurting so we stopped and made him a duct tape ankle brace and gave him my trekking poles. Taylor protested, but Justin stole his pack and carried it for him. Slowly we continued on. I was in the lead position. It was warm, but I wouldn't call it hot. The trail was easy and I was enjoying the walk, daydreaming a bit when, "Whoa, whoa, whoa!" is all could think to say when a big ol black rattlesnake dropped down from an embankment right in front of me. One more step and I would have stomped on his tail. He slithered up the side of the trail, coiled up under a bush, and started rattling. He was a handsome fellow, I'll give him that. He was too close to the trail for us to pass safely. I kept my eyes on him while Zach got me a rock. I threw it at him, not trying to hit or hurt him, but to encourage him to move along. He got the hint and slinked away. After that I was keenly focused on the trail. 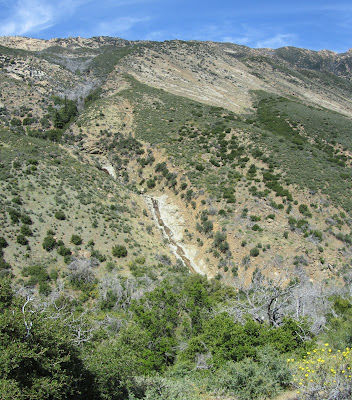 We had descended enough that the pine trees were gone and poison oak was starting to show up on the trail. We had been blissfully free of the dreaded plant up to this point. I started to hear the happy yelling of kids playing in water. We must be close to Twin Forks I thought. Yup, there was the fork of the Piedra Blanca Creeks, and there was Frank sitting on a log waiting for us. He told me some Boy Scouts had taken the upper campsite, but he managed to get us the lower site. Sweet, it was 4:00 and I was stoked we were going to have a spot. The lower site is pretty cramped for five dudes. There's poison oak all over the place. But there was plenty of nice dry firewood piled up on the side of the creek. The only shade was down by the creek, so that's where we hung out for the last few hours of daylight. We made up a bunch of freeze dried dinners and passed them around. I little more Rye, and we were telling old stories. 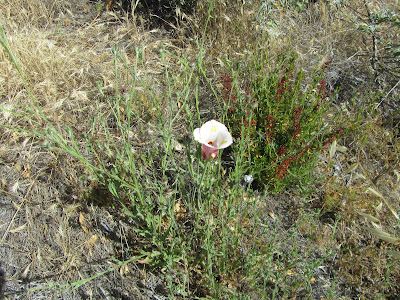 On the second day Zach had asked me what this flower was called and I didn't remember. That night I awoke from a dream and all could remember from it were two words, "Mariposa Lily."

In the morning we got up early. We were fed and packed by 8:30. When we got to Piedra Blanca Camp there was like 15 Boy Scout leaders having a meeting. A little further down at the overflow camp there were more Scouts. 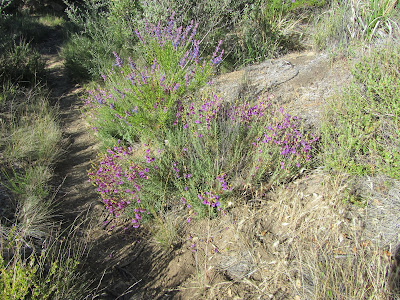 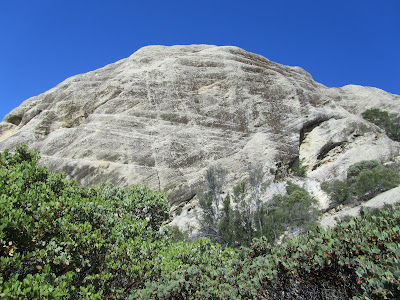 Our ride was scheduled to pick us up at noon, so we still had some time to kill. We explored the Piedra Blanca rock formation for awhile. Then we made our way to the trailhead. And that was it. We got picked up. Frank, Heidi, Zach and I made a beeline for the Ojai Beverage Company where enjoyed some good beers and some tasty sandwiches.
Posted by Ventura County Canyoneering at 9:16 AM